How to Play the Challenging 2 Deck Solitaire Game 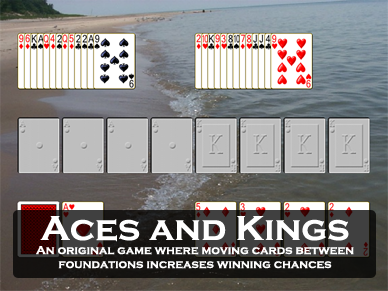 Click on the screen shot of the game Aces and Kings from Pretty Good Solitaire to download the 30 day trial version.

Aces and Kings is a challenging and original 2 deck solitaire game with a simple layout that was invented by me especially for Pretty Good Solitaire.

My version of Aces and Kings in Pretty Good Solitaire allows you to play offline, full screen, with complete undo and my unique right click quick move. It's the best way to play solitaire!

How to Play Aces and Kings Solitaire

Aces and Kings for Windows 10 or Mac!

Because there are 13 cards buried in each reserve pile, it is important to play cards from the reserves as much as possible.

The key to winning is to make use of the fact that there is no restriction on moving cards between foundation piles. That is, when you are building the Ace piles up and the King piles down, when they meet you can move cards from one to the other. This is a great way to play off cards that couldn't otherwise be played. When the foundation piles meet, look for ways to move the cards between piles so that you can play off cards from either the reserves or the tableau.

Aces and Kings is a very difficult game to win, even the best players rarely win better than 10% of the time. Most players only win about 5% of the time.


Variations of Aces and Kings 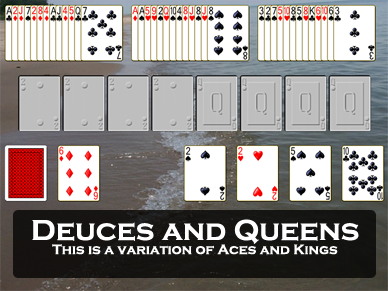 Includes Aces and Kings and 1000 Other Solitaire Games


Rules to Aces and Kings Solitaire