About Aces Up Solitaire 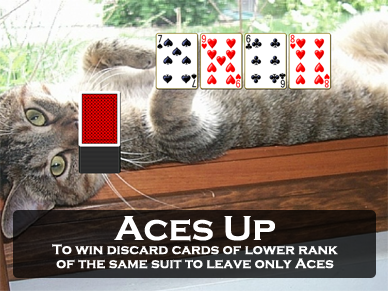 Screen shot of the game Aces Up from Pretty Good Solitaire.


Aces Up is a simple but fun and popular solitaire game.

When all possible cards are removed, deal four more cards on top of the four piles. If one of the four piles should become empty, you can move any top card from any of the other piles into the empty space to create more possible plays.

The object is to remove all of the cards except for the Aces.

Aces Up is an easy game to play, but it is not easy to win. As you can see from the Aces Up statistics, the average player wins only about 4% of the time. A good player can increase this rate.

The primary area of choices in Aces Up is deciding what card to play into an empty space. It is best to try to find a card that will allow you to remove many other cards. Note that the only way to get at cards beneath an Ace is to move the Ace to an empty pile.


Variations of Aces Up