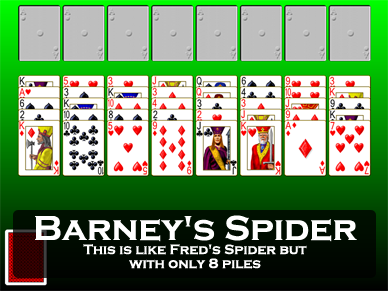 
Barney's Spider is a variation of the popular spider type game Fred's Spider. It is a two deck game.

Barney's Spider begins by dealing 5 card each to 8 tableau piles. All of the cards are face up. The remaining cards in the decks are dealt face down to a stock pile.

There are 8 foundation piles, which are to be built up in suit from Ace to King as usual. The game is won if all cards are moved to the foundations.

In the tableau building is down regardless of suit. However, you can only move groups of cards if they are in sequence down in suit (this is like Spider). Spaces may be filled by any card or legal group of cards.

When you get stuck, clicking on the stock will deal one card to each tableau pile. 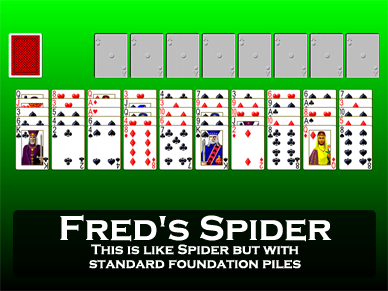