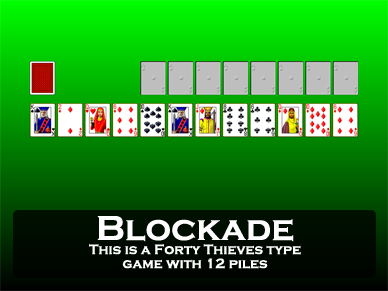 Screen shot of the game Blockade (similar to Barricade) from Pretty Good Solitaire.


Barricade is a variation of the game Block.

Block is an extremely difficult game. As you can see from Block's online statistics, Block is nearly impossible to win.

Barricade is a somewhat easier game. While still very difficult, Barricade gives you a fighting chance to win.

At the start of the game, two cards are dealt face up to 14 tableau piles (two more than the 12 in Block). The remainder of the deck forms a stock. There are eight foundation piles, which are built up in suit from Ace to King. Any cards dealt to the tableau at the start of the game that can be moved up to the foundation piles are moved up immediately.

The tableau piles are built down by alternate color (rather than in suit as in Block). Only one card at a time may be moved. Spaces in the tableau are filled automatically from the stock. This is, in fact, the only way that cards in the stock are brought into play.

The game will often block quickly. You need to try to get as many cards out of the stock as possible. The moves you choose should try to get the maximum number of cards exposed.