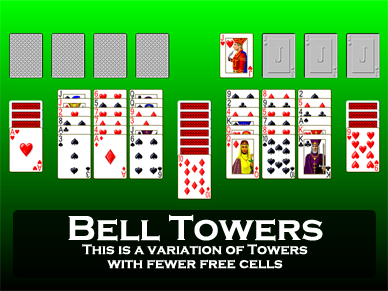 
Bell Towers is a FreeCell type game based on the game Towers.

Bell Towers is a one deck game. There are four foundation piles, these will be built up in suit from the rank of the first card dealt to the first pile, wrapping from King to Ace. When all of the cards are moved here, the game will be won.

There are four free cells, just as in FreeCell. The cells start the game empty and can contain one card. Cards in the cells are available for play on any other piles.

There are six tableau piles. At the start of the game six cards are dealt face up to each pile. Building is down by color. Move groups of cards if they are in sequence down by color and if there are enough free cells that the cards could be moved individually. Fill spaces with any card or group of cards. 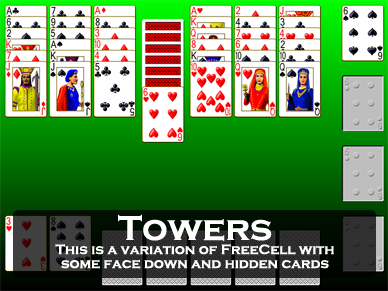