Build on the Black Hole 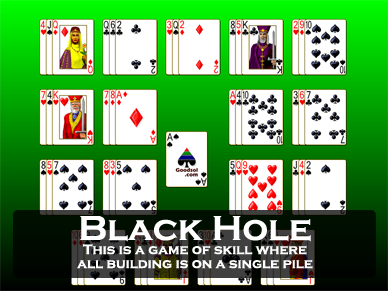 
Black Hole is an original game invented by David Parlett.

At the start of the game, three cards each are dealt to 17 fans (tableau piles). All of the cards are face up. In the middle, the Ace of Spades is dealt to form the one and only foundation pile. The foundation pile is built up or down regardless of suit, with Ace and King considered consecutive.

Black Hole is easy to play, but requires a great deal of advance calculation to win. Map out the cards you wish to play to the Black Hole before you play them.

Here are some tips from Bert Hager from the Goodsol Forum:

1) If the same card is available to be played from two or more stacks -- never play from the stack that has only one card in it. Playing from the mult-card stack will uncover a new card, playing the single card would not help for future plays.

2) If the same card is available to be played from two or more multi-card stacks -- look at the #2 card that would be uncovered in each stack and count the number of times that #2 card is already showing at the top of stacks. Play from the stack that has the lower number count.

3) If the same number count was found for the cards that would be uncovered in tip 2, then look at the #3 cards below (if there are any). Count the number of times that #3 card is already showing at the top of stacks. Play from the stack that has the lower number count. If a stack has just two cards, then the #3 card count is obviously zero.

4) If the #3 card count was zero in all those stacks in tip 3, then play from the stack that has more cards in it.

5) If the counts were found the same in tips 2 and 3, and the stacks are the same height, then compare the top card and next card in each of those stacks. Play from the stack that has a #2 card which would be needed sooner in future play in the current sequence direction.

Sometimes, tip 5 may need to be considered before tip 4, if the #2 card is needed urgently to continue the playing sequence.

Assuming that following tips 1 through 5 allowed you to play from the stacks until about 16 cards remain, stop at that time and look at the remaining multi-card stacks. If they are all pointing in the same direction that the sequence is going, then just continue playing to the end. You will win about 20% of games just this easiLy!

Other times, there may be no way to end on, for example, a King when going up because either Kings or Queens are missing from the bottom of all stacks. Then a simple <ì>knot will remove them earlier, play ->Q-K-Q-K-> and the final sequence can end on a Jack instead. 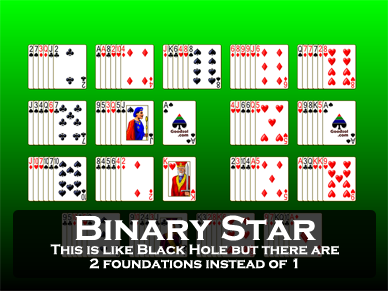 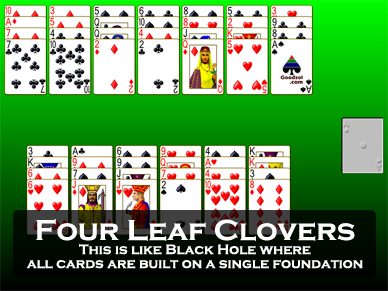