Blind FreeCell is a new game in Pretty Good Solitaire version 17.2. It is a FreeCell type game.

The start of the game is almost identical to FreeCell. There are four cells at the top and four foundation piles. The foundation piles are to be built up in suit from Aces to Kings as usual. The game is won when all the cards are moved here.

Below the cells and foundations are the eight tableau piles. At the start of the game, six cards are dealt to each pile, but only the top card is face up (very different from FreeCell, which has only face up cards). The remaining four cards in the deck are dealt face up to the four cells.

Because all the cells start the game with cards in them, this means that you cannot move a group of cards until you have created an empty cell.

Blind FreeCell, unlike FreeCell, is not an open game with all cards face up. That means you have less information about where all the cards are, which makes winning more difficult. 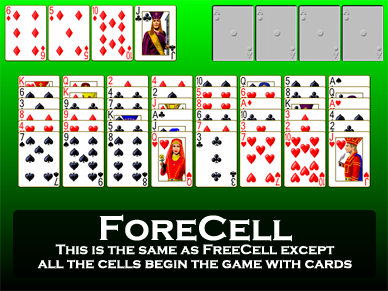 My name is Thomas Warfield and I have been creating solitaire games since 1995.

FreeCell is a popular solitaire game that is almost always winnable.

My version of FreeCell in Pretty Good Solitaire allows you to play offline, full screen, with complete undo and my unique right click quick move. It's the best way to play FreeCell!

You can download the free trial version Pretty Good Solitaire now. If you like it (and I know you will), you can buy it for only US$24.95 and get years of fun.

If that is too much, FreeCell is also in our cheaper game FreeCell Plus. You can download the free trial version of FreeCell Plus here.