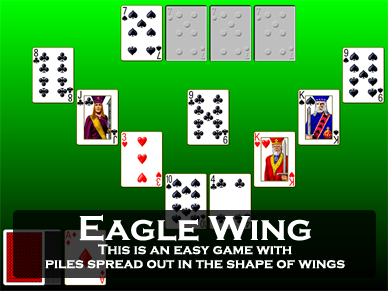 Eagle Wing is a classic game of solitaire with a somewhat unusual tableau.

Spaces in the tableau are filled automatically from the reserve trunk pile until it is empty, after which spaces may be filled by any card.

Eagle Wing is fairly straightforward to play and can be won by an average player about 80% of time using the standard rules and by a good player nearly every time.

However, there are a number of rules variations that can make the game easier or harder. In Pretty Good Solitaire (Windows), you can go to the Options menu and set the number of cards dealt to the trunk at the start of the game to 13, 15, 17, 19, or 21, therefore making the game harder. You can also set the number of redeals to 0, 1, or 2.

In Pretty Good Solitaire Mac Edition, or in the Windows Goodsol Solitaire 101, these different rules variations are separated out into 14 different games, such as "Eagle Wing [19 easy]", which has a trunk of 19 cards and 2 redeals. This separation allows each rules variation to have its own high scores in those games, so there are many high scores lists for Eagle Wing in those games. (Note: these bonus games are available only in the full versions of Pretty Good Solitaire Mac Edition and Goodsol Solitaire 101).

Eagle Wing is one of the 850 games in Pretty Good Solitaire. 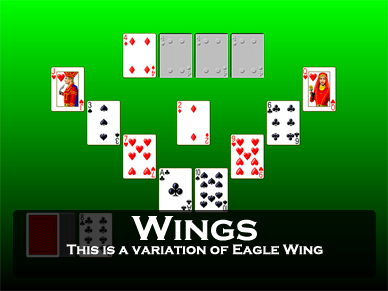