Play the challenging variation of The Plot 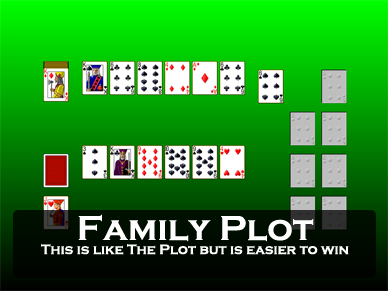 
Family Plot is a two deck game, a variation of the game The Plot. The Plot is an extremely difficult game, Family Plot has easier rules that make it possible to win a reasonable percentage of the time.

At the start of the game, one card each is dealt to 12 tableau piles. 13 cards are dealt to a reserve pile. One card is dealt to the first foundation pile to be the foundation base card. The remainder of the cards form a stock.

Cards from the reserve may be played on any non-empty tableau pile or to the foundations.

Play consists of dealing through the stock one card at a time. There is one redeal.

In game #1, build as many Hearts as possible in the tableau. Since there are two times through the deck, ignore cards of other suits unless they can be played on other cards in the deck. Reserve spaces for Hearts.

Also, try to always keep at least one space in the tableau. Spaces can be used to build at the top of a sequence. For example, if the top card of a pile is the Jack of Diamonds, if the Queen of Diamonds comes up, play it to an empty space then move the pile with the Jack of Diamonds to it. You can only do this as long as you keep a space available.

Once the first foundation pile is complete, you can then start playing to build the cards of the other suits.

An average player wins Family Plot 50% of the time. Good players can win nearly every time.

Family Plot is one of the 850 games in Pretty Good Solitaire. 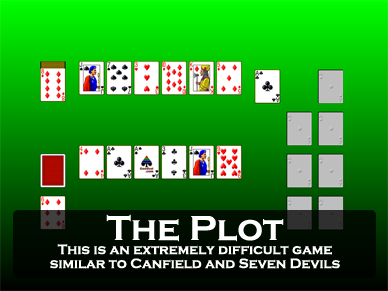