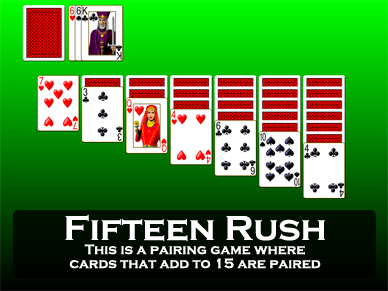 
Fifteen Rush is a one deck Addlition type game that I invented.

There are seven tableau piles. At the start of the game,1 card is dealt to the first pile, 2 cards to the 2nd, and so on, just as in the game Klondike. The top card is face up.

Discard pairs of cards whose ranks add to 15 or pairs of Aces (Ace-Ace, Two-King, Three-Queen, Four--Jack, Five-Ten, Six-Nine, Seven-Eight). To discard a pair, drop one card on the other, or right-click on one of the cards.

The remainder of the cards form a stock. Clicking on the stock turns over three cards at a time to a waste pile. The top card of the waste pile is available for pairing on the tableau. There are unlimited redeals.

The game is won if all the cards are paired and removed from play. When there are no remaining moves and there are remaining cards, the game is lost.

Fifteen Rush is a relatively easy game to win. An average player wins about 88% of the time, with 100% scores very possible. 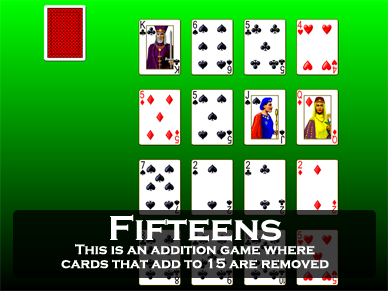