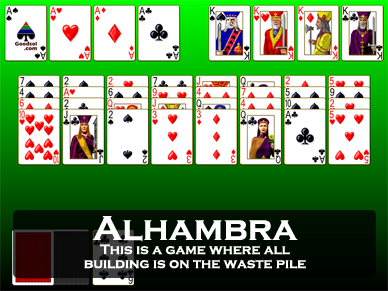 Screen shot of the game Alhambra (similar to Granada) from Pretty Good Solitaire.

Granada is a two deck variation of the classic game Alhambra.

In Granada, 4 Aces and 4 Kings (one of each suit) are put out to form 8 foundation piles. The aces are built up in suit and the Kings are built down in suit. Then 4 cards each are dealt to 8 reserve piles. The remaining cards form a stock. In addition, the game begins with 4 empty cells.

The cards in the reserve piles can be played to the foundations (if possible) or moved to the cells. There is no building in the reserves. However, you can build on the cells up or down in suit, wrapping from Ace to King or King to Ace.

When play comes to a standstill, click on the stock to deal a card to the top of each cell. There are two redeals.

Granada is a fairly easy game to win. Alhambra is a much tougher game. Alhambra is like Granada except there is only one cell (considered a waste pile), rather than four. A 2% winning percentage is a great percentage for Alhambra.