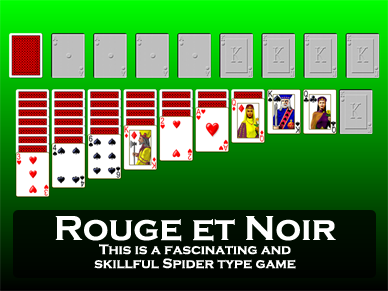 
Royal Noir is a new game in Pretty Good Solitaire v16.2. It is a game I invented that is similar to Rouge et Noir.

It is a two deck game. There are ten tableau piles. At the start of the game 8 cards are dealt to the first pile, 7 cards to the 2nd pile, and so on until 1 card is dealt to the 8th and 9th piles. The 10th pile is left empty. The top card of each pile is face up.

The remainder of the cards form a stock that will be turned over one card at a time to a waste pile by clicking. There are no redeals.