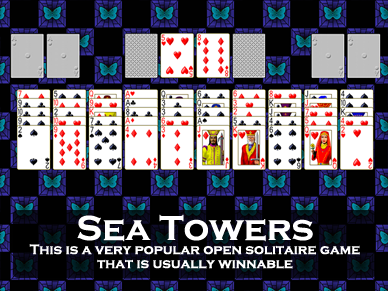 
Sea Scorpion is a one deck game with aspects of the games Scorpion and Sea Towers.

At the start of the game, the deck is dealt to ten tableau piles, 5 cards to a pile, except for the first and last piles, which have 6 cards. All of the cards are dealt face up.

There are 4 cells above the tableau. Each cell is a storage location for one card, as in FreeCell or Sea Towers.

This means that keeping cells empty is very important to being able to move cards around. The more cells you fill up, the fewer cards you can move.

Sea Scorpion was a new game in Pretty Good Solitaire version 12.4 and therefore very few people have played it yet. It isn't really known how often you can win, but you ought to be able to win it most of the time or nearly every time. 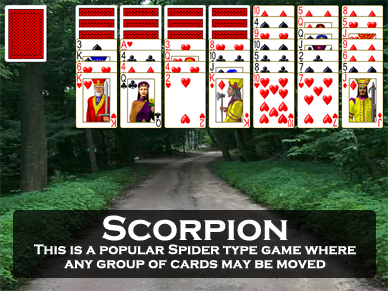