About Seven by Seven Alt 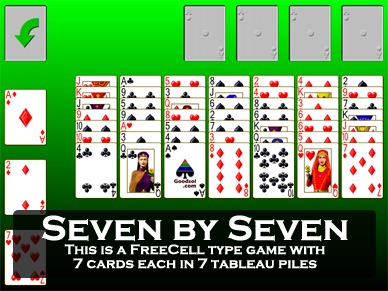 Screen shot of the game Seven by Seven Alt from Pretty Good Solitaire.

Seven by Seven Alt begins by dealing seven cards to each of seven tableau piles. All of the cards are face up. The remaining three cards in the deck are dealt one each to three cells.

The object is to build four foundation piles up in suit from the Aces to Kings. The tableau piles are built down by alternate color. There is no group moving, except if there are enough empty cells that the cards could be moved individually, then if the group is in sequence down by alternate color, it may be moved as a unit. This is like FreeCell. The cards in the cells are available for play on the foundations or tableau.


Variations of Seven by Seven Alt