About Straights and Pairs Solitaire 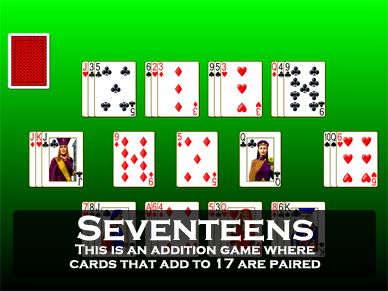 Screen shot of the game Seventeens (Similar to Straights and Pairs) from Pretty Good Solitaire.

The object is to found the Aces and build four foundation piles up in suit from Ace to King. The game is won when all the cards are moved to the foundations.

A game of Straights and Pairs has two parts. The first part is while there are cards remaining in the stock, the second part is after the stock is empty.

In the first part of the game while there are cards in the stock, you pair cards of the same rank (such as two Jacks). Paired cards are moved to a single waste pile. When a tableau pile is empty, a card from the stock is played to the empty tableau pile. This brings cards from the stock into play. Your objective in this first part is to build on the foundations if possible and to bring all the cards into play to empty the stock. Therefore you want to pair cards to clear tableau piles.

In the second part of the game after the stock is empty, play changes. Now you build tableau piles down regardless of suit. In particular, you try to extract all the cards that were paired up in the waste pile back into play in the tableau so that they can be played in sequence to the foundations. To win you will need to extract all of the paired up cards from the waste.

When pairing cards in the first part of the game, you will want to try to pair higher ranked cards first. These cards will then be buried at the bottom of the waste pile in the second part of the game. If you bury low ranked cards deep in the waste, you may have trouble extracting them to play them on the foundations.

Straights and Pairs is one of the 850 games in Pretty Good Solitaire.


Variations of Straights and Pairs