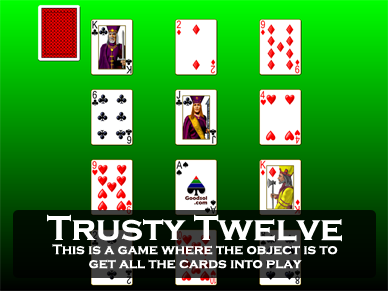 Sweet Sixteen is an unusual game in that there are no foundations. All building takes place on the 16 piles of the tableau.

The game begins with one card dealt out face up to each of 16 piles. The remaining cards form a stock. Play consists of building down by alternate color on the tableau piles. Only one card at a time may be moved. Whenever a card is moved creating a space in the tableau, a card is automatically dealt from the stock to fill the space.

The object is build enough sequences so that all the cards in the deck are dealt out to the tableau. When all the cards are dealt and the stock is empty, the game is won.

The skill in the game is in selecting which cards to move to build sequences. You want to make the sequences as long as possible so that you can bring as many cards as possible into the tableau. Ideally, you'd like to start sequences with Kings and build down in alternate color down to Ace. However, this is often not possible because the Kings and other high ranked cards may not be available.

Build high ranked cards first, as they will allow for longer sequences. Only when you have no other choice do you want to create sequences of low ranked cards such as Threes, Twos, or Aces.