How to Download and Play the Fast Paced Solitaire Game 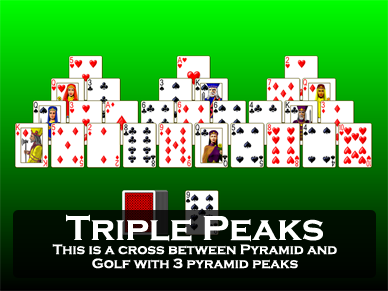 Click on the screen shot of the game Triple Peaks from Pretty Good Solitaire to download the 30 day free trial version.

Triple Peaks has some similarity to Pyramid, in that the tableau is of pyramid shape, except there are three peaks to the pyramid. It is also somewhat like Golf in the way it is played. And it is very similar to the game Pyramid Golf in Pretty Good Solitaire.

My version of Triple Peaks in Pretty Good Solitaire allows you to play offline, full screen, with complete undo and my unique right click quick move. It's the best way to play solitaire!

How to Play TriPeaks Solitaire

In this video I explain how to play TriPeaks. Download Triple Peaks Now and play along!


In Triple Peaks 28 cards are dealt out face up into three triangular peaks. The remaining cards form a stock. One card is turned over to start the waste. All play is on the waste pile. Build cards on the waste pile up or down regardless of suit, wrapping Aces on Kings or Kings on Aces. If there are no plays, click on the stock to turn over a new card to the waste.

The objective is to get as many cards to the waste as possible and clear the three peaks. In Action Solitaire, there is the additional objective of getting the highest score possible. 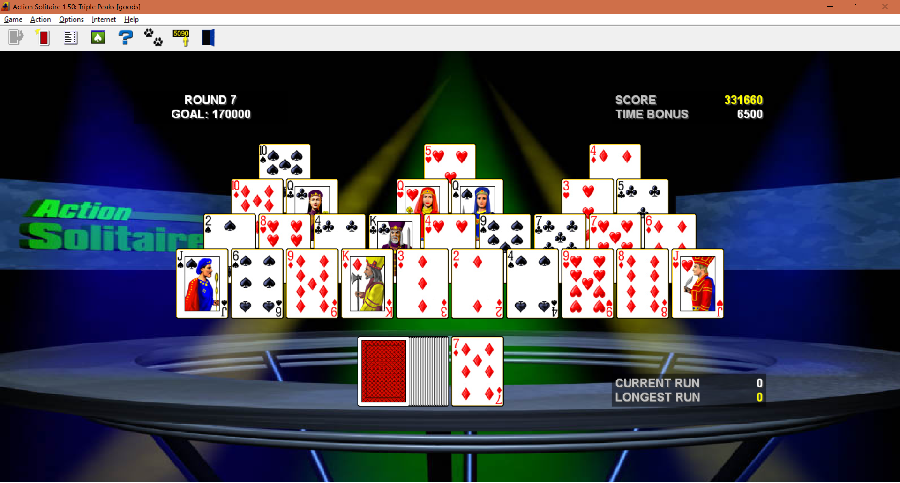 Screen shot of the game Triple Peaks from Action Solitaire.

The key to building points in Triple Peaks is to remove cards in long runs while turning over as few cards in the stock as possible. Since you get 1000 more points each time for each card you remove in a run, long runs can build up huge point totals. The penalty for turning over a card from the stock is very high (5000 points), so playing to turn over as few cards as possible is vital. The best strategy is to play until you get a long run that builds up points putting you over the goal for the round, then leave the round immediately.