About Fourteen Out Solitaire 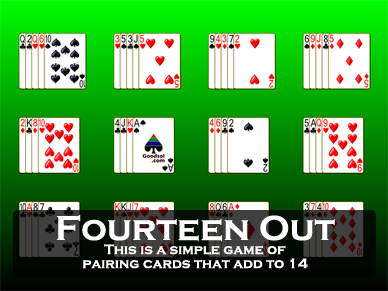 Screen shot of the game Fourteen Out from Pretty Good Solitaire.


Fourteen Out is a simple, one deck solitaire game of addition.

At the start of the game, the single deck is dealt out into 12 piles (four piles of five cards each and eight piles of four cards each). All of the cards are face up, making Fourteen Out what is called an open game. The top card of each pile is available for play.

To play Fourteen Out, you simply pair cards whose ranks add to 14. That is, a King pairs with an Ace, a Queen pairs with a 2, a Jack pairs with a 3, a Ten pairs with a 4, a 9 pairs with a 5, an 8 pairs with a 6, and a 7 pairs with another 7. If the top card of two different piles make a pair, simply remove the pair of cards from play (in computer games, this is usually done by just dropping one of the cards on the other).

The object is to pair all of the 52 cards and remove them all from play.

Although Fourteen Out is a very simple game to play, there is actually strategy in this game. You want to look for possible blocks. A block can happen if you have several cards that pair together all in the same pile (or even possibly in several piles blocking each other). You may need to carefully pair up these cards to empty these piles.

It is likely that there are impossible positions in Fourteen Out, but with good play you should be able to win well over 90% of the time. Nevertheless the game is difficult enough that an average player only wins about 50% of the time.


Rules to Fourteen Out Solitaire


Variations of Fourteen Out 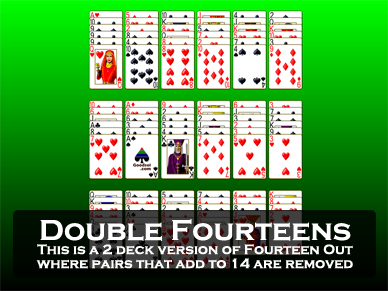 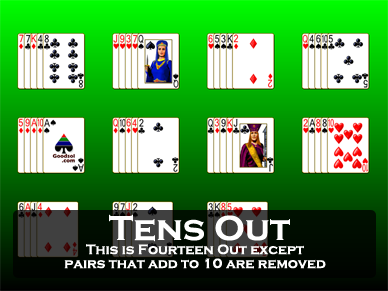